So yesterday evening I finally plucked up enough courage to have a go at something I have wanted to do for ages – have a stab at developing my own black and white film.  And it worked! 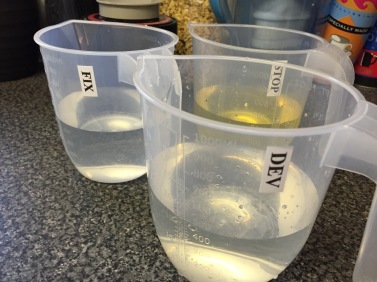 The first film was a 35mm cartridge of Fomapan classic 100.  I say a cartridge…I shot this film about two weeks ago and when trying to change the film in my Olympus OM-1 I forgot to cock the release lever.  Therefore when winding back the film snapped off of the cartridge and was left in the camera.  On the beach(!) I opened the camera back, saw this mess and closed it quickly in the hope of potentially saving it later…!  At home I put the lot into a darkroom bag and managed to get the film into a blacked out 35mm plastic canister and taped it shut.  There it sat until last night… Into the bag again it went onto the spiral and into the developing tank.  7 mins in Ilfotec DD-X agitating the tank for the first ten seconds of every minute and 3 minutes in Ilford Rapid Fixer and it was done.  In my haste I actually forgot the Stop step, but it doesn’t seem to have affected the process.  Film washed in routinely changed water in the sink and it was done!  Big smile.

The second film was also a Formapan but this time a Creative 200, again 35mm cartridge.  This required 6 mins in Ilfotec DD-X  again agitating the tank for the first 10 seconds of every minute.  I remembered the stop stage this time…aggitating the tank for 15 seconds then leaving to stand for a further 30 seconds.  Out with the stop then the fix was in for 5 minutes, agitating for the first 30 seconds then a few seconds every minute.  I do not have a mixer tap at home for continuous running water at 20 degrees so filled the sink to the right temperature and washed in there.  I have read somewhere that this is a perfectly acceptable wash method and it seemed to work fine for me.  The films were wiped and hung to dry, then cut and the results can be seen below –

Tomorrow hopefully I will have access to a scanner, so I’ll get them scanned in and have a good look at them.  Once I get them scanned, I publish them so you can have a look, until then, here’s an alligator from a visit to Thrigby Hall Wildlife Gardens in Norfolk with the family. 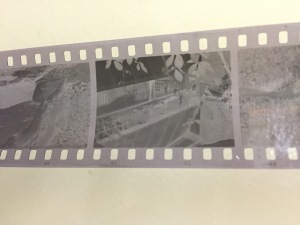