Discussion is always rife on the internet about rebranded film – “oh don’t buy ‘X’ its just rebranded ‘Y'”. “I use ‘A’ because its rebranded ‘B’ and its cheaper…”

I don’t personally care much about rebranded film.  Film’s film to me within reason, one look in my fridge will confirm that – but I know that there are people who do care, and this quick post is for them.

Direct your browser, either desktop or mobile, to dexter.pcode.nl and you will be presented with this – 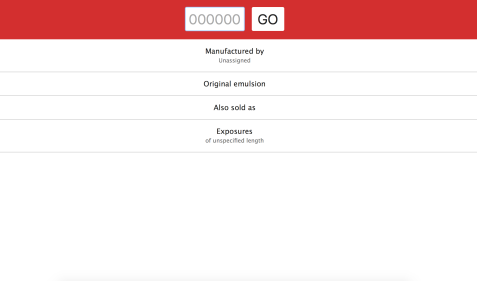 Now on your 35mm film cartridge, have a look under the barcode and you’ll see a six digit number.  Input that number in the box at the top and hit GO.  You’ll now get something like this…

I used got old AgfaVista 200 from Poundland (RIP) as an example.  Quite a good example actually because this is one I see again and again being discussed.  As you can see the site claims it to be a Fujifilm emulsion, the Fujifilm 200 stock, and details what other films it was rebranded as, one of them being the infamous Agfa Vista film.  It also tells you how many exposures are on the roll.